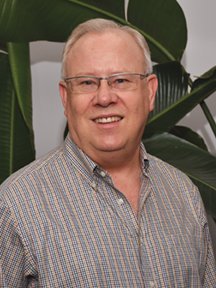 Few education careers cover as many miles and experiences as the 46 years Bill Guy spent teaching, supporting, prodding and uplifting students, teachers, support professionals, administrators and members of the association.

Bill, organizing specialist for the Oklahoma City Metro region, retired earlier this month after his second stint at the Oklahoma Education Association.

“My career has just been the most rewarding thing,” Bill said. “I’ve just felt so fortunate to have had the experiences I’ve had and to work in a profession where I’ve been able to make such a difference in people’s lives.”

Bill’s career started and ended in Oklahoma, with stops in Australia and three other states in between. After starting his journey teaching in Holdenville, he taught four years in Australia. He returned to Oklahoma where he taught and worked at El Reno Junior College (now Redlands Community College) and then taught English at El Reno High School.

Along the way, he was part of some historic education events. In Massachusetts, he was in a meeting with other MTA colleagues and U.S. Sens. Ted Kennedy and John Kerry when they first began discussing No Child Left Behind with the association. In California, he assisted local associations with their communications efforts and helped guide three locals during strikes. One was especially ugly when the Capistrano School Board wanted to decrease teacher pay by 13%. The Capistrano Unified Education Association held a successful strike and flipped the school board from a group who were determined to undermine the public school by pushing for vouchers.

As president of the El Reno Education Association, Bill was a big part of the rally for HB 1017 and the famous Four Days In April. Two years ago, he was part of OEA’s communications and organizing efforts around the historic teacher walkout for better pay and school funding.

Retirement looks to be just about as busy as his career. Bill plans to stay involved with education advocacy through the Oklahoma Retired Teachers Association. Soon, he will receive certification as a life coach with a specialty in working with families who have someone in recovery or needs to be in recovery from substance abuse. His certification for recovery assistance comes from the BALM Institute, the only such program recognized by the International Coaching Federation.

“Bill’s contribution to OEA members over years has been noteworthy,” said OEA Executive Director Jim Keith. “Bill has served our educators through organizing, communications, and served as the staff rep on our Human and Civil Rights Committee, helping navigate many hard conversations in a changing Oklahoma. Bill’s polite presence will be sorely missed, but we wish him the very best in his next journey.”