House and Senate leaders held a press conference today to announce that a budget agreement has been reached, and there are cuts all around.

Under the agreement, the State Department of Education will receive a 2.5% cut. Most other state agencies will be cut 4%, though core services such as health, public safety and transportation will see slightly smaller reductions, according to a release from the State Senate.

Federal relief money will help soften the blow. Oklahoma education received about $200 million in pandemic relief money – $160 million for Title programs through the State Department of Education and $40 million for Gov. Kevin Stitt to use at his discretion.

During the question-and-answer portion of the press conference, a reporter asked if a cost-of-living adjustment for retirees was tied to the budget agreement. Both houses said, no, there are no policy bills attached to the agreement. Sen. Roger Thompson, chair of the Senate Appropriations Committee, said the Senate is still discussing the COLA bill, but that no decisions had been made.

The House earlier passed HB 3350, a 4% COLA for retirees, by a vote of 99-0 (with one legislator not voting through “constitutional privilege).

Both houses will have to vote for the budget proposal, which will include several bills, before it goes to the governor.

“In these unprecedented times, we know the legislature has very difficult decisions to make. Every dollar should go to core state services. We’re grateful that this budget proposal holds education as harmless as possible. The State Department of Education has $160 million in federal relief money to help soften the blow.

“While the legislature and Congress have tried to protect education, we still need to close the digital divide. This pandemic has highlighted the serious lack of broadband Internet access for rural Oklahoma and a wide gap in the access to technology for many students. We encourage Gov. Stitt to add the $40 million in education relief money he has at his discretion to the State Department of Education.

“Also, we call on the Senate to support a cost-of-living adjustment for our retirees. This bill has already passed the House unanimously. Our retirees absolutely need this now more than ever, and it will cost the state nothing.” 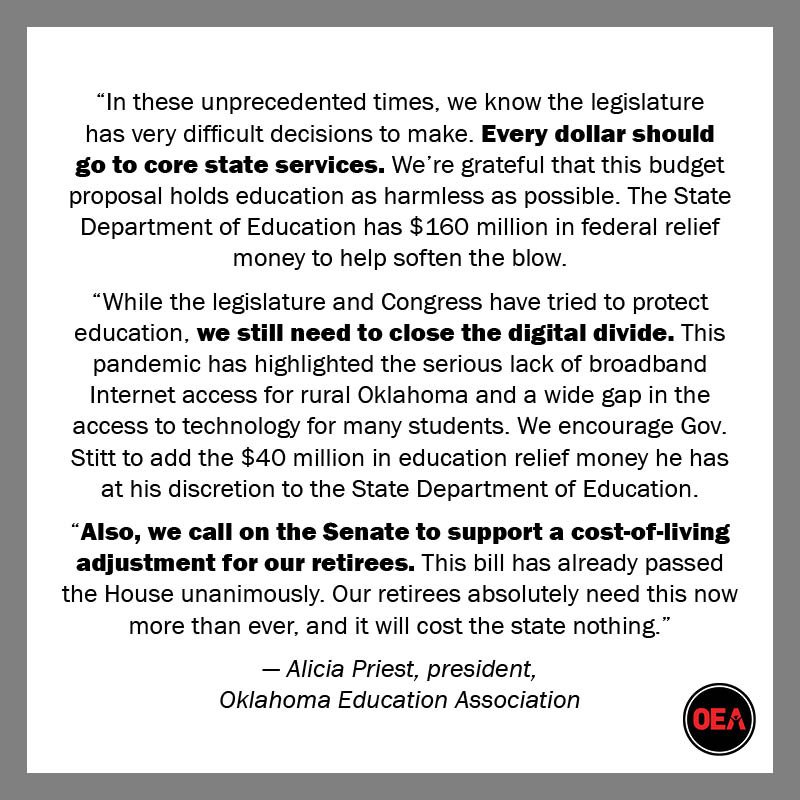