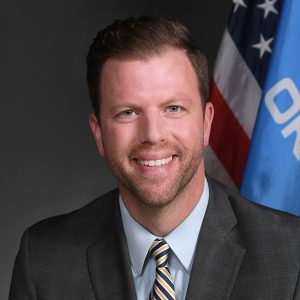 While many people – both well-known and anonymous – actively work for equal treatment and justice, Rep. Jason Dunnington is in a somewhat unique position to take decisive action.

As a legislator, Dunnington has the ability to write and push legislation that improves human and civil rights. He has done so throughout his legislative career, which has earned him OEA’s 2020 F.D. Moon Educational Award. It is one of OEA’s four Human and Civil Rights Awards.

The award was established in 1972 in honor of F. D. Moon, principal at Oklahoma City’s Douglass High School for 21 years. Moon was elected to the Oklahoma City Board of Education and wrote several human relation studies on teacher integration. OEA presents the award to an individual who has contributed significantly to the advancement of education for students.

“Rep. Dunnington’s passion for helping make things better for his constituents is demonstrable when you see the issues emphasized in both the legislation he authors and that (which) he supports,” said Melissa Pelletier, OEA-OKC president, in her letter recommending the Oklahoma City legislator for the award.

“He is also a strong supporter of public education. He is active in getting out in the community and school district, attending events, working with coalitions and meeting with his constituents to gain personal knowledge of their lives and families to better inform his work on their behalf.”